‘In Malavika... the high art of Bharata Natyam has found its most challenging and contemporary voice’ (Shanta Serbjeet Singh). 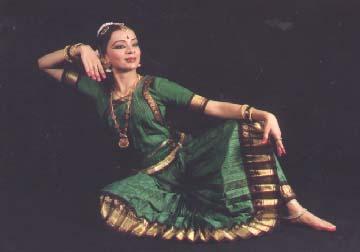 Today, Malavika Sarukkai is acclaimed, nationally and internationally, for her contemporary Bharata Natyam dance style with its innovative-within-tradition choreography. It is a remarkably rich and intensive style that combines dynamism and grace, austerity and passion, energy and repose. It is a style that is aesthetic and accessible and constantly evolving.

Malavika begun her studies in dance at the age of seven, training under Guru Kalyanasundaram of the Tanjavur School and Guru Rajaratnam of the Vazhuvoor School. She also studied abhinaya with Guru Kalanidhi Narayanan and the Odissi dance style with Guru Kelucharan Mohapatra and Guru Ramani Jena.

A firm believer in the continuity of the Indian classical tradition, Malavika presents Bharata Natyam as a vibrant and meaningful dance form of today to audiences across the world. As a foreign critic observed, “Malavika’s most remarkable achievement is her ability to obey the rules of Bharata Natyamn, yet bring non-specialist viewers close to its heartbeat by making every moment seem personal, spontaneous and even contemporary”.

Malavika’s exceptional artistry was featured in the BBC/WNET television documentary ‘Dancing’, a nine hour series on world dance. A film ‘Samarpanam’, specially commissioned by the Government of India, has been made on her life and work.

Festivals of India in:

‘Malavika possesses that something which makes the difference between mere beauty and the exceptional’ - Andree Penot, La Croix, Paris, 85

‘Everything is perfect. The poetry, the music and the dancing merged like fragrance and flower. A rare experience’. - Dr. Sunil Kothari, The Economic Times, Delhi, 87

‘She emerges as a pathmaker in classical dance’ - K.S. Srinivasan, Sruti, Madras, 82

‘Malavika enables one to go behind the mind and, for a few precious, unforgettable moments, experience what lies beyond time’ - Shanta Serbjeet Singh, The Hindustan Times, Delhi, 93

‘Malavika, in the chiselled lines of her dance, has perfected Bharata Natyam to a point where its geometrical exactitude cannot be bettered. To say that she left the audience speechless, in sheer admiration, would not be an exageration’ - Leela Venkataraman, The Hindu, Delhi, 97

‘She brings a new and impressive view of the real world concerns to her performance... like a new bottle for old wine, Sarukkai transforms her body into a vehicle for social change’ - David Gere, Pillow Notes, Jacob’s Pillow Dance Festival, USA 98

Uthkanta looks into the urge of longing. The longing to create. To generate and nurture. To grow with the fullness of life. To reach for the sacred.

Uthkanta speaks in the voice of the woman.

Traditionally, in India, the woman and the tree are seen as having close links. A tree, while celebrating its vitality, speaks of its longing to live its life fully.

A village woman, when her longing for motherhood is denied, finds fulfillment elsewhere.

A dancer moves in space sculpting it with stretches of longing and leaps of expectation.

Yearning for grace, a seeker calls to the divine – some times in hope, more often in anguish.

In Uthkanta, the lotus, a symbol of creativity and life, appears as a recurring motif. According to Hindu thought, the primordial waters in which the lotus is rooted are female. “They are the maternal, procreative aspect of the Absolute, and the cosmic lotus is the generative organ” through which all creation comes into being.

2. “Other Voices of Women in Bharata Natyam”

a talk by Malavika Sarukkai to be held on Thursday 25th October 2001 at 6.45 pm at the Nehru Centre in London

“ I don’t think Bharata Natyam needs to be equated only with a set repertoire which evolved under certain social and historical circumstances. Rather it is, for me, an eloquent language of dance through which I express my innermost feelings.

The traditional nayika-nayaka bhava spoke about the man –woman relationship and was completely valid in its time as a temple and court dance. But, as a dancer and a woman of today I am re-looking at tradition and extending it to other spaces that resonate with our lives. Bharata Natyam is for me a liquid, flowing expression of life.

Over the years I have moved in the direction of expanding the emotional landscape of women in dance. Voices of Women reflects this. I have been extending the movement and gesture vocabulary in the need to be true to the essence of each new piece Commissioning new lyrics and music and creating new structures.”